I am not what you would call a “football fan”. I have watched my father suffer the highs and lows of being a Forest supporter (“Come on, you Reds!); I have cheered on my son at after-school sessions in Wish Park; I have celebrated the rise of women’s football and been impressed by number of young players coming through the ranks at Brighton Girls; I am proud that we host the first girls-only Paris Saint Germain Academy at our school, and that Ms Plank, our Director of Sport, names football as her specialism. Nevertheless, it has to be said that football remains peripheral in the grand scheme of my life.

But then.. every two years (pandemics permitting), a major championship comes along. Euro 2020 is here and football is everywhere. For an intense few weeks, football becomes the backdrop to our lives; and, every time, we are reminded of its universal importance. Whether we like it or not, football is the sport of the people; it holds a mirror up to society, reflecting all our hopes and dreams, but also highlighting the ugliness in the world, the division, the flaws, and the many injustices.

We saw this last summer when Marcus Rashford entered the political area to raise awareness of food poverty – the power he harnessed, through football, challenged mindsets and changed lives. We’ve seen it recently with players taking the knee to highlight racial

inequality and discrimination. This week, we’ve seen it again, with the news that UEFA were dropping their planned investigation into Manuel Neuer’s decision to wear a rainbow armband, and in their decision not to grant permission for Munich’s Allianz Arena to be lit up in pride colours for Germany’s match against Hungary. While Neuer’s rainbow armband was deemed to be a team symbol for diversity and thus for a ‘good cause’, the request from the Munich council for the Allianz to be ‘glowing in rainbow colors’ was viewed (as it was intended) as a direct protest against a new Hungarian law that bans people from the LGBTQ+ community from featuring in school educational materials. Both decisions point to the inextricable link between football, politics and the wider world and both reveal, as one Year 6 pupil pointed out this week, that while we have come a long way in terms of diversity and inclusion, we still have a long way to go.

In school this week, we have been celebrating diversity, ahead of National Pride Day on Sunday. While we can’t (easily) light up the school buildings in pride colours, we can weave metaphorical rainbows in our daily lives. It was great to see pupils and staff in the Prep wearing rainbow-coloured clothes yesterday (a suggestion that came from Clementine in Year 6), but what was truly uplifting was the maturity and depth of the discussions we had in response to the stories about Manuel Neuer and the Allianz Arena: fearless, thoughtful, sensitive, empathetic, respectful – some of the words that characterised the discussions I had with Year 7 and Year 6 on Thursday.

There are rainbows everywhere. We don’t need special occasions to make them appear, just a determination to look up, to see the best in people and a commitment to celebrating our differences.

“Look up to the sky. You’ll never find rainbows if you’re looking down.” (Charlie Chaplin) 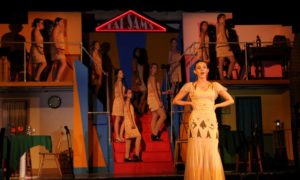 Give a Little Love